Here are the Nelson DeMille books in order for his series and standalone novels. 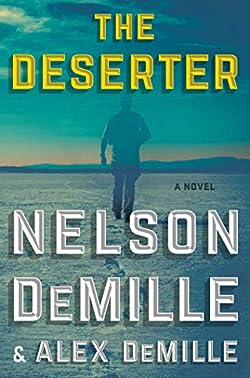 Nelson DeMille was born in New York City in 1943, and as a child, he moved with his family to Long Island, where he attended the Elmont Memorial High School. After he left high school, he enrolled at the Hofstra University, where he remained for three years before going to the army and enrolling at the Officer Candidate School.

Nelson DeMille fought in Vietnam during 1966-1969 and received numerous medals and badges of honor for his outstanding service. He is a decorated Army veteran, winner of the Air Medal, Bronze Star, and Vietnamese Cross of Gallantry.

After leaving the army, he returned home where he finished his last year of university, graduating in Political Science and History. He holds three honorary doctorates.

The author’s first novels were detective mysteries. His debut novel was By the Rivers of Babylon, published in 1978. This was also the first book I have read by him in the early 1980s.

The latest book written by Nelson DeMille is The Cuban Affair, published in 2017, the first in a new series featuring Mac MacCormick, an Afghanistan War veteran aged 35. The book focuses on Mac’s adventures in Cuba, which is just 90 miles from Key West. The story is set in 2015, before Fidel Castro’s death. The ending left it open for a second book in the series to be written and published. While at the moment both the author and the publisher considers The Cuban Affair a standalone, at some point it will be continued, said the author in an interview.

Daniel (Mac) MacCormick has served two tours in Afghanistan, is retired from the army and now is working in n Key West Florida as a charter boat captain, a fishing vessel he named The Maine. When he gets an offer for the Maine to participate in a ten-day fishing tournament to Cuba, he is also asked to help the three Cuban-Americans find and return sixty million dollars left behind by the refugees.

In an interview, the author mentioned that he started this new character and a new series because he moved from Grand Central Publishing to Simon & Schuster, a publishing house which wanted new stuff from DeMille, a fresh start altogether.

Just as he was doing research and began writing his book, in October 2015 Nelson DeMille received a brochure from Yale about a two-week trip to Cuba. He took the opportunity and then the book really came together since the author could now take actual photos, speak with the locals and do his research live.

The John Corey series is planned to be turned into a TV series. The rights are owned by Sony who partnered with ABC TV in order to create the new show. It will probably become a limited series of 10 or 11 episodes since the books are only 7 in number only as well.

A couple of actors interested in playing John Corey were Ben Affleck and Alec Baldwin.

The author Nelson DeMille is thinking of bringing back John Corey as well as the series’ fans would love that, but all is still out in the open as of yet.

Nelson DeMille’s writing career has spanned almost 40 years and he has written so far over 20 books. He is a member of Mensa, Poets & Writers, as well as the Authors Guild. He was president of Mystery Writers of America, and now he is a regular member. In 2015, the International Thriller Writers, of which he is a member, gave him the honor of ThrillerMaster of the Year.