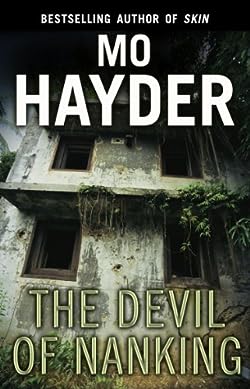 The Devil of Nanking

With the redolent atmosphere of Ian Rankin and the spine-chilling characters of Thomas Harris, Mo Hayder’s The Devil of Nanking, takes the reader on an electrifying literary ride from the palatial apartments of yakuza kingpins to deep inside the secret history of one of the twentieth century’s most brutal events: the Nanking Massacre.

A young Englishwoman obsessed with an indecipherable past, Grey comes to Tokyo seeking a lost piece of film footage of the notorious 1937 Nanking Massacre, footage some say never existed. Only one man can help Grey. A survivor of the massacre, he is now a visiting professor at a university in Tokyo.

But he will have nothing to do with her. So Grey accepts a job in an upmarket nightspot, where a certain gangster may be the key to gaining the professor’s trust. An old man in a wheelchair surrounded by a terrifying entourage, the gangster is rumored to rely on a mysterious elixir for his continued health.

Taut, gritty, sexy, and harrowing, The Devil of Nanking (Tokyo) is an incomparable literary thriller set in one of the world’s most fascinating cities-Tokyo-from an internationally best-selling author.