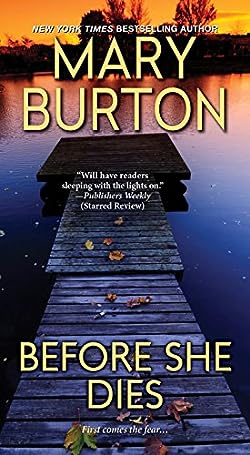 Book #3 in the Senseless series, published 2012

Romantic suspense star Burton infuses every sentence with suspense in “Before She Dies,” her chilling new thriller in which a serial killer obsessed with the occult plays judge, jury, and executioner. Original.

In death, they are purified. Holding his victims under water, he washes away their sins as they struggle for their last breath. Then he stakes their bodies to the ground, exposing them for what they really are. Witches, sent to tempt and to corrupt.

No one knows about defense attorney Charlotte Wellington’s murdered sister, or about her childhood spent with the carnival that’s just arrived in town. For Charlotte, what’s past is past. But others don’t agree. And as a madman’s body count rises, she and Detective Daniel Rokov are drawn into a mission that’s become terrifyingly personal.

At last, she is within his reach. All his victims deserve their fate, but her guilt is greatest. And with every scream, he will make her see what it means to suffer and repent—before she dies…