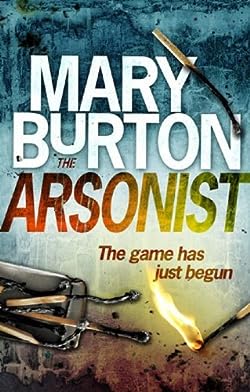 Once he solved the Nero case, arson investigator Michael Gannon blasted out of town on his motorcycle. No way would he return to the job, but his nightmares persisted. Gannon found some relief in a small Virginia town…until the fires started again. Back in the public eye, he had to face his demons and the incomparable Darcy Sampson, a feisty reporter who urged him out of hiding.

His game A monster who left the charred, savaged remains of twelve innocents in his wake,  Nero strikes fear wherever there is fire.  As new fires have been ripping through a small Virginia town, the countdown to Nero’s thirteenth murder has begun.

His rules Haunted by the agonising screams of Nero’s victims, investigator Michael Gannon refuses to let the arsonist claim another life. Especially reporter Darcy Sampson, who Gannon knows is treading too close to the flames in her determination to unmask the killer. Your nightmare But relentless Nero is watching, waiting for them.

And he doesn’t like players who try to best him at his own game. Now he intends to teach Michael and Darcy one last, fatal lesson.