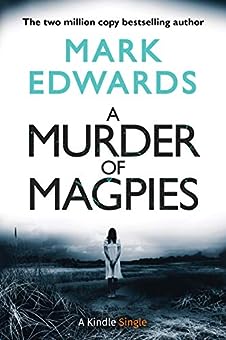 Book 2 in The Magpies series
published 2018

The terrifying sequel to the #1 bestseller The Magpies.

Five years ago Jamie Knight lost everything: his home, his wife and their unborn child. But at least the woman responsible, ‘Dark Angel’ Lucy Newton, was in prison, and slowly Jamie was able to rebuild his life.

But now Lucy has been freed on appeal, and before long Jamie receives a message from a desperate stranger. Lucy is up to her old tricks—ruining lives for fun.

Jamie agrees to help. But once again, he has no idea what he is getting himself into…

Lucy and Chris were two psychopaths who never should have met. They fed off of each other and was responsible for a lot of murder and mayhem. They liked nothing better than being known as the Neighbors From Hell. They tormented people for the sheer pleasure of annihilating them and their lives.

It is pretty short, not a full-length book, and is the second installment in The Magpies psychological thriller series by Mark Edwards.