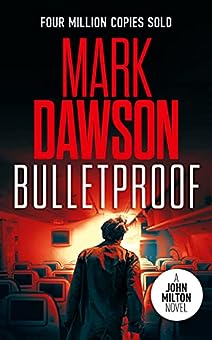 John Milton thought he could run forever. He was wrong.

For years, former secret service agent and trained killer John Milton thought he could outrun his past, his demons and his enemies. His enemies had other ideas.

Captured and imprisoned by the organization he once worked for, Milton must do one last job in exchange for his freedom. They need him to work out a deal between the Russians and the Indian Government. If John manages to do so, his file will be revoked and his slate wiped clean (or so they say). Bullheaded billionaire fixer Tristan Huxley is brokering a weapons deal between Russia and India. He needs protection and he wants Milton by his side. Huxley has trusted Milton with his life before but these days his world is more decadent and his enemies more dangerous, in ways that nobody could ever have suspected.

Finally, the man who thought he’d never be forgiven has the chance to wipe the slate clean, once and for all. But is it really a case of no more running for Milton? Can the Group be trusted to keep their word and let him go? And who is it that really needs protecting?

After all, nobody is bulletproof, not even John Milton.