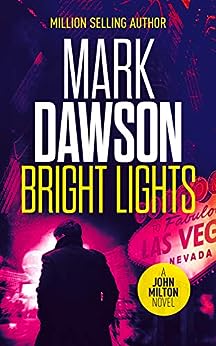 John Milton is driving from San Francisco to Las Vegas when he picks up a young woman in distress at the side of the road. His act of kindness has consequences that he could not possibly have anticipated, and leads him on an adventure from Sin City to Siena, from San Francisco to El Salvador.

The stakes are higher than they have ever been, and Milton’s unexpected need for revenge awakens the devil he has tried to smother for so long.

John Milton once again tries to balance out his ledger, needing to cancel out all the bad things he has done in the course of his career, but his luck runs true to form. When helping a stranded young lady get to Las Vegas, the tides turn and some folk intend to use and abuse him.

What starts out to be a cross country drive for Milton in his recently purchased Pontiac GTO turns into another exciting adventure. By trying to help out a stranded young lady he becomes involved in a kidnapping by drug cartel members. However, what they didn’t count on was John Milton himself.