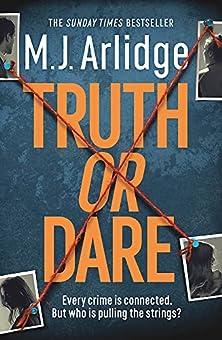 A crimewave sweeps through the city and no-one is safe. An arson at the docks. A carjacking gone wrong. A murder in a country park. What connects all these crimes without causes, which leave no clues?

Detective Inspector Helen Grace faces the rising tide of cases which threatens to drown the city. But each crime is just a piece of a puzzle which is falling into place.

And when it becomes clear just how twisted and ingenious this web of crime is, D.I. Grace will realise that it may be impossible to stop it.

After Covid-19, the country is in one of the worst recessions ever. Never before has Inspector Helen Grace faced so much violence and unrest. For the first time in her life, she is afraid of losing control: her faithful partner Charlie is on maternity leave, and, at the same time, her colleague Joseph Hudson does everything to make her life miserable.

Three murder cases keep Helen up at night: an old, rich man, murdered during a burglary at his immense house; a young care manager, stabbed to death in his car with a screwdriver; and a young college student, assaulted and bludgeoned to death in the local park. Then she gets a message that the private detective who was investigating these cases has been burned alive. Like Helen, he thought so much violence in such a short period of time couldn’t be a coincidence, but even with this clue, she can’t see the connection. And time is running out, because the perpetrator does not shy away from any challenge to prove himself.