Last Updated on March 11, 2022  Lisa Gardner is an American author well known for her many crime thriller novels, many included in series, while others written as standalone books.

I have listed below the Lisa Gardner books in order for her series and the standalone novels. I won’t be listing the Alicia Scott books, as they are romance novels, and beyond the scope of Mystery Sequels. 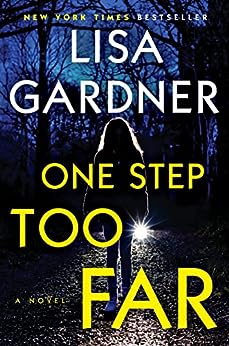 Should We Read The Lisa Gardner Books In Order?

I have read all 3 series by the author Lisa Gardner, and if you want to start with any of the series, I do suggest you read the books in order. Luckily it’s easy as the publication date and the chronological order of these books are the same, so if you follow the list above, reading them in the right order shouldn’t be a problem.

Having said that, I feel I should mention one exception. When reading the first Detective D.D. Warren books, I felt I could have read them pretty much in any order. D.D. hardly appears in the first books, and even the third book she is not much there. However, as the series progresses, we see more of her, and we see her character develop nicely – I felt I actually started to really like her by books 6.

However for the sake of continuity, if you pick up the earliest D.D. Warren books and read them before continuing with the newest ones, I think you will be best served.

In the 1990s, she worked as a research analyst in Boston for a consulting firm called Mercer Management. Lisa Gardner started her career in the food industry, however soon she turned her talents to writing, much to the delight of her loyal fans. Before writing thriller novels, she wrote several romantic suspense novels under the pseudonym Alicia Scott for the Silhouette Intimate Moment publisher. She worked for three years on her debut novel, which she finally published at the age of 20.

In 2014 she moved with her family and two dogs to New England, where she is busy working on her next novel.

While this is, in fact, my favorite set of books by Lisa Gardner, she has also written two other series, Detective D.D. Warren, with several books published (latest book, #7.5, published early 2016 is a short story with the title 3 Truths And A Lie), and Tessa Leoni, with 3 books written in the series (book #3 with the title Crash & Burn was published in 2015).

In addition, Lisa Gardner has also written several standalone thriller novels, and under the alias Alicia Scott, she has published 13 romance novels.

The first thriller she wrote, The Perfect Husband, took the author 3 years of writing and editing until it got ready to be published. Soon after publication, it climbed the New York Times bestseller list, getting to position 17.

Most of the Lisa Gardner books are based on real-life stories, cased that actually happened. For example, Look For Me was inspired by a headline the author read in the newspaper. True crime is something Lisa Gardner is interested in, and her tales can weave lots of different possibilities, whereby the author asks herself, ” how would you approach this in real life?”

For example, Find Her is inspired by a particular article Lisa read on a new FBI unit that deals with assisting victims of crime. From this unit she learned that a victim’s journey is far from over once the perpetrator is caught. She also keeps asking for a new novel, “What does it mean to be a survivor?”

Also, for her research, the author keeps tabs on the latest technological advancements that the police are using in solving their cases, such as Alexa, or the Echo from Amazon. She also interviews experts in their fields, and she always learns more forensic techniques that she can implement in her books. She also visits institutions that help her set the scene better. Over the years, she went to mental wards, maximum security prisons, morgues, and FBI academies. In addition, she is known to interview family members of kidnap victims, who know first-hand what it is to live with the torment in their lives.

Initially, when writing Alone, Lisa Gardner envisioned D.D. Warren to have only a few chapters in the book, and she didn’t imagine the detective would become the main hero of a long-standing series.

The latest Lisa Gardner book, Look For Me, also brings back Flora Dane, who first appeared in Find Her, initially as a victim and then as a vigilante.

Having been a thriller writer for 25 years, currently, Lisa Gardner has over 22 million books in print across more than 30 countries.

13 Responses to “List of Lisa Gardner Books In Order”