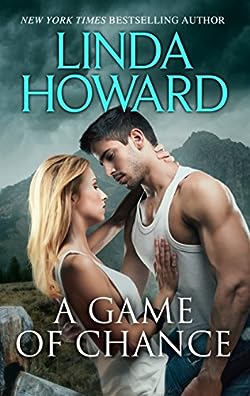 A Game of Chance

by Linda Howard
Book #4 in the Mackenzie Family series (2000)

Romantic suspense, originally published by Silhouette Intimate Moments. The last book in the Mackenzie Family series focuses on Chance Mackenzie, a feral, homeless adolescent until rescued and adopted by Wolf and Mary Mackenzie.

Undercover agent Chance Mackenzie knew that the best way to capture an elusive terrorist was to use the man’s daughter as bait, so he cleverly seduced Sunny Miller and set out to discover her father’s whereabouts.

Sunny’s own innocence was questionable, and gaining her trust was nearly impossible. And even with all his experience and training, Chance found it difficult to overlook her beauty.

However, Chance soon realized that Sunny wasn’t running from him – she was running for her life, and she needed Chance’s protection. But keeping Sunny safe would involve telling her the truth – about his mission and what she’d done to his heart.