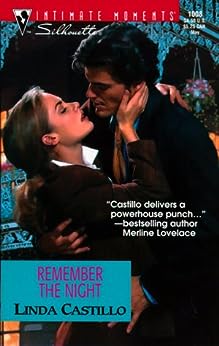 Michelle Pelletier had no alibi, a fuzzy memory and an utterly gorgeous detective on her doorstep accusing her of murder. Philip Betancourt wasn’t buying her plea of innocence. After all, she’d confessed only half the truth.

The lady had a body to haunt a man — and a shadowy past to boot. But Philip knew a frame job when he saw one. His instincts insisted he protect her…by keeping the sexy suspect very close. Philip wouldn’t let anyone harm this vulnerable beauty who would make someone a perfect wife…

Detective Philip Betancourt is called to a crime scene in New Orleans. A highly respected lawyer was shot and there is a witness. But beautiful Michelle Pelletier claims she can not remember what happened last night. Although Philips colleagues believe that Michelle is the killer, he considers her innocent and puts her career at risk. Does he go into the net of a dangerously sensual seductress?

The romantic side of Linda Castillo, the author of the popular Kate Burkholder series, set against the backdrop of New Orleans. This is an older Silhouette Intimate Moments release.