Reading the author’s books in order means picking up the book series, which currently includes over ten books and five short novellas. Fallen was released July 2021 as book #13. Of course, then you also have the author’s second series, Operation: Midnight, a series which is also worth reading in order. 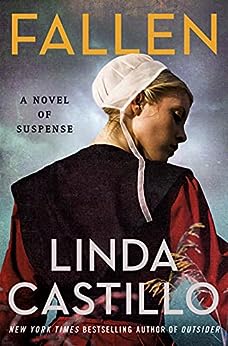 Kate Burkholder grew up in an Amish community, and she left soon after she was sexually assaulted by a local member of the church. She did stay another four years before leaving, while constantly growing more and more doubtful by the way of life she was involved in. She finally left the community at the age of 18.

In the meantime, she became a successful and highly respected police officer. She is now 30+ and she finally decided to return to her home roots to Painter’s Mill in Ohio. As she grew up in the area and had an Amish background, she was soon made the town’s Chief of police.

Kate is a very human character. She has her flaws, but she is a good person who wants to do good in her town. She is not very outgoing, she is more of a reserved person, and she no longer feels she belongs to the Amish.

Throughout the Kate Burkholder novels, the Amish keep recurring due to various crimes committed that involves the community as well. Every now and then, she is confronted with her past, and she is constantly reminded of her roots.

If there is one book series that sheds some light on the Amish community, this is it.

Here are the Linda Castillo books in order for her book series and standalone novels.

(some romance, some romantic suspense)

Who is Kate Burkholder?

Kate Burkholder grew up among the Amish, however, at the age of 14, she was sexually molested and survived the brutal attack of the Slaughterhouse Killer, following which she left the Amish community at the age of 18 when she no longer believed in her folks. This caused a rift between her and her folks who didn’t see kindly to her leaving them.

Now, at the age of 30, Kate returned home to Painter’s Mill, her Ohio town. Over the years she has become a respected person, a strong one who believed in herself. She is now also a respected police officer. Due to her ties to the Amish in the area, she has now been promoted to Chief of Police Kate Burkholder for the town. Since she is now near the Amish and some of her investigations take her to her folks, her job takes her to increased interactions with them.

She is pretty sure that she has come to terms with her horrible experience in the past right until her first case in town when a body is found in a snowy field and she has to investigate. With each further case, Kate has to somehow break the silence that is so characteristic of the Amish people to try to find the killers she is after.

Born in 1960 in a small farming community in Western Ohio (which is also the setting for her Kate Burkholder series), Linda Castillo knew from an early age that she was meant to write novels. She wrote her first story at the age of 13.

She met her husband in 1985. She currently lives in the Texas Panhandle on a small ranch with her husband, where she works on her next novels. In her spare time, she loves riding horses on her property.

Sworn to Silence, her debut thriller, is also the first in her popular Kate Burkholder series, which was well received by readers and critics alike. The author’s insights into the Amish community is higly regarded, and her books give an interesting glimpse into the people’s lives, particularly that the Amish are rather closed to the outsides and often their lives are a mystery.

Linda Castillo did extensive research, read a few scholar books on the topic, and also lived for a while with several Amish families during her trips to Ohio for research. Her books won so far several nominations and industry awards.

I have read several novels from the Linda Castillo book list, including some of her romantic suspense stories, and if I have to choose, I’d definitely go with her Kate Burkholder series. I love that book series. Kate is a young Amish girl living in a quiet and peaceful rural town called Painters Mill in Ohio. After a series of tragic events that left Kate scarred emotionally and psychologically, she left the place, seemingly for good.

Years after, she is asked to come back to the town, and now she has a new capacity: Chief of Police Kate Burkholder. In each of the books, Kate is called to solve various crimes of murder and bring the killers to justice.

As I mentioned above, the books should be read in the proper chronological and publication order, since each novel builds up (in terms of character progression) from the previous one to the next one.