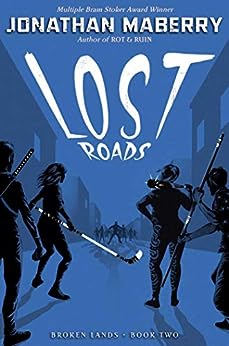 Simon & Schuster has bought Jonathan Maberry’s Rot & Ruin: Broken Lands, which will push reset on his YA series Rot & Ruin, about teenagers surviving the zombie apocalypse.

In Broken Lands and its sequel, Lost Roads, Maberry introduces a new cast of characters and puts a new spin on the walking dead by exploring bizarre mutations, new human threats, and a nightmare landscape of nature gone wild and weird.

Gutsy and her friends, along with Benny and his crew, have just survived a massive attack on New Alamo by the Night Army—a mix of mindless shambling los muertos and sentient half-zombie ravagers. She’s also reeling from the revelation that the residents of her town were the lab rats of the biological testing facility linked to creating the most dangerous zom, the Raggedy Man, who controls all of the living dead.

And the first raid was only a test. The real Night Army is coming, and this time, it’ll be a handful of survivors against seven billion zombies.