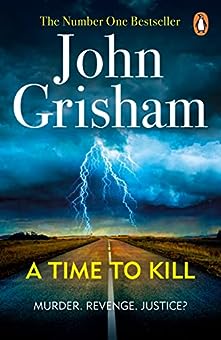 The multi-million copy bestselling thriller that introduced Jake Brigance to Clanton. This is the book that launched the giant Grisham, that became the film, and then inspired a sequel, Sycamore Row.

Before “The Firm” and “The Pelican Brief” made him a superstar, John Grisham wrote this riveting story of retribution and justice. In this searing courtroom drama, best-selling author John Grisham probes the savage depths of racial violence, as he delivers a compelling tale of uncertain justice in a small southern town, Clanton, Mississippi.

The life of a ten-year-old girl is shattered by two drunken and remorseless young men. The mostly white town reacts with shock and horror at the inhuman crime. That is, until her black father acquires an assault rifle and takes matters into his hands. When Carl Lee Hailey guns down the hoodlums who have raped his ten-year-old daughter, the people of Clanton see it as a crime of blood and call for his acquittal.

For ten days, as burning crosses and the crack of sniper fire spread through the streets of Clanton, the nation sits spellbound as young defense attorney Jake Brigance struggles to save his client’s life, and then his own.