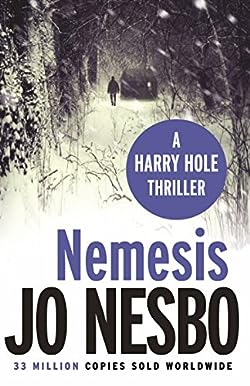 Footage of a surveillance camera-a hooded man enters an Oslo bank, holds a barrel of a gun to an employee’s head and orders her to count up to twenty-five. When he does not take the money at the time he sets, he pulls the trigger. The woman falls dead and two million Norwegian krones disappear without a trace.

After a long drinking binge at Anna Becken’s old girlfriend’s house, Detective Harry Holle wakes up in his home with a headache, no cell phone, and no memory of the last twelve hours of his life. On the same day Anna is dead with a bullet in her head in her bedroom, and Holle is the main suspect.

Meanwhile, the bank robberies continue with unceasing brutality, and Holle starts a dizzying race from the Norwegian capital to hot Brazil to clear his name. But Nemesis, the goddess of revenge, has yet to say her last word.