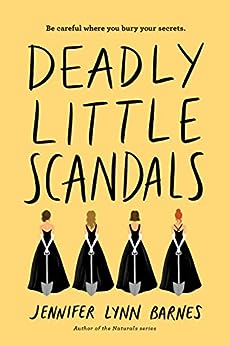 Book #2 in the Debutantes series, published 2019

“Think of the White Gloves like the Junior League-by way of Skull and Bones?”

Deadly Little Scandals takes us back to the world of Southern High Society as Sawyer and her family navigate the Summer Lake Season with new secrets, confessions, and as always, many, many scandals.

Sawyer is still at Grandma Lillian’s house soaking up the last bit of summer when a mysterious invitation to join an even more mysterious secret society lands at her front door. She took her grandmother’s offer for college tuition in exchange for doing the debutante thing in order to find out who impregnated her teenage mother.

Reluctant debutante Sawyer Taft joined Southern high society for one reason and one reason alone: to identify and locate her biological father. But the answers Sawyer found during her debutante year only left her with more questions and one potentially life-ruining secret. When her cousin Lily ropes her into pledging a mysterious, elite, and all-female secret society called the White Gloves, Sawyer soon discovers that someone in the group’s ranks may have the answers she’s looking for.

Things are looking up… until Sawyer and the White Gloves make a disturbing discovery near the family’s summer home–and uncover a twisted secret, decades in the making.

No one is quite who they seem to be.