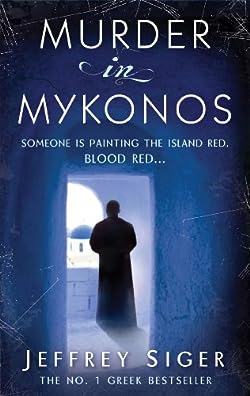 by Jeffrey Siger
Book #1 in the Andreas Kaldis series (2008)

A young woman on holiday to Mykonos, the most famous of Greece’s Aegean Cycladic islands, simply disappears off the face of the earth. And no one notices.

That is, until a body turns up on a pile of bones under the floor of a remote mountain church. Then the island’s new police chief, the young, politically incorrect, former Athens homicide detective Andreas Kaldisastarts finding bodies, bones, and suspects almost everywhere he looks.

Teamed with the canny, nearly-retired local homicide chief, Andreas tries to find the killer before the media can destroy the island’s fabled reputation with a barrage of world-wide attention on a mystery that’s haunted Mykonos undetected for decades.

Just when it seems things can’t get any worse, another young woman disappears and political niceties no longer matter. With the investigation now a rescue operation, Andreas finds himself plunging into ancient myths and forgotten island places, racing against a killer intent on claiming a new victim who is herself determined to outstep him.