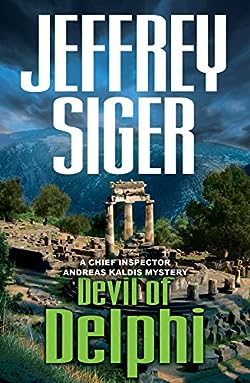 by Jeffrey Siger
Book #7 in the Andreas Kaldis series (2015)

In modern day Delphi, a young Athens emigree seeks to re-build his life in anonymity among its pastoral, rolling hills and endless olive groves. But the man’s dark past is too celebrated, and his assassin skills are too much in demand for his fate to be left to his own hands.

When he’s given no choice but to serve the ruthless aims of an international criminal mastermind, he agrees, but on his terms. His methods bring unexpected death to a member of one of Greece’s most prominent and feared political families, and draws Chief Inspector Andreas Kaldis into the eye of a political and media firestorm threatening to bring down the nation’s government.

It is a gripping, fast-paced story played out against a backdrop of World Heritage Sites, an annual global trillion-dollar legitimate alcoholic beverage industry preyed upon by counterfeiters of the industries’ most celebrated brands, and political infighting among Greek revolutionaries, movers and shakers.

Kaldis and his team soon find themselves battling purveyors of life-threatening adulterated booze, struggling to bring a cold-blooded killer to justice, and laboring to outthink a political chess-master determined to destroy Kaldis’ ailing boss, Greece’s Minister of Public Order—all without turning themselves and their families into deadly targets.