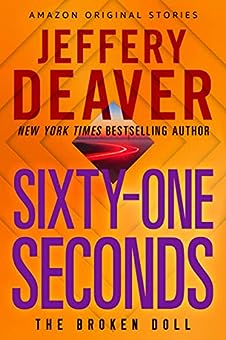 The hunter has captured her prey, and a sociopathic crime boss faces justice at last. But it’s not the end of the story. On a crowded street, gunfire and death are waiting to explode.

A festive street fair is underway in the shadow of the courthouse, where a judge has just signed an extradition order. Paul Offenbach is escorted outside in handcuffs to a police cruiser—with another trick up his sleeve no one expects. In a matter of seconds, the killer is free, a hostage is taken from his family and Special Agent Constant Marlowe has lost her bid for justice. But is this the final chapter? As the lives of the guilty, the innocent and the vengeful converge, the winner remains uncertain.

From the internationally bestselling master of suspense Jeffery Deaver comes Sixty-One Seconds, part of The Broken Doll Collection, a series of interconnected short stories about killers and prey, justice and revenge, that can be read or listened to in a single breathless experience.