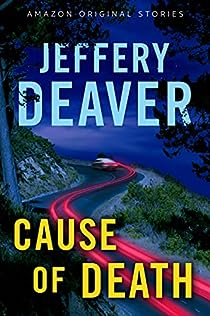 New York Times bestselling master of suspense Jeffery Deaver unveils the secrets of a marriage when a husband decides to investigate his wife’s death in this gripping short story.

Jon Talbot is a history professor who makes sense of the past by examining facts. He also knows how to speculate about the what-ifs. Jon’s doing both following the death of his wife, Pax. Driving home late from a volunteer assignment, she plunged off a mountain highway and died. The police find nothing suspicious about the facts: a deer in the road, a blown tire, a broken neck. But the what-ifs are leading Jon down a twisting trail of secrets. After five years of marriage, he is finally getting to know his wife.

His novella is a short story set in Martinsville County, Massachusetts featuring professor Jon Talbot who is grieving his wife’s accidental death. She was a charity worker and a volunteer. However, when some Detective Roland Briggs meets Jon, he is looking for his wife’s mobile phone which could not be found among the items with her. Jon talks to his friend, Deputy Garner, about this, and the case becomes highly suspicious. Is this really an accident or something more sinister is going on here?