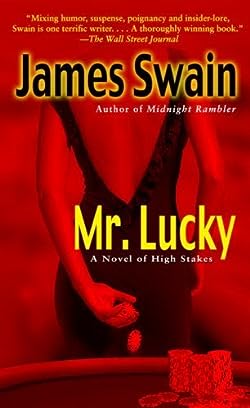 Ricky Smith was once a small-town loser. Then he went to Las Vegas, jumped out the window of a burning hotel, lived to tell the tale, and tore up the Strip on an incredible winning streak. Ricky didn’t just win at one slot machine or table game. He won at blackjack, roulette, and craps, and then beat the pants off the world’s greatest poker player.

Tony knows that goofy, loudmouthed Ricky Smith-or anyone else, for that matter-couldn’t possibly be” “that fortunate. But when “Mr. Lucky” returns home to the little town of Slippery Rock, North Carolina, he keeps on winning everything from a horse race to a $50,000 lottery.

Hired by a desperate casino, Tony starts to pry into Ricky’s past, his friends, and the strange little town that is benefiting from Ricky’s fame and fortune. Unfortunately for Tony, his cover is blown when he is forced to reveal a trick he has up his own sleeve: a pocket Glock he can shoot with laser-like precision.

Suddenly, two men are dead, the cops are on Tony’s tail, and the investigation explodes in violence-putting the lives of Tony’s son and his young family in danger. For years, Tony’s son Gerry has dueled with his own criminal impulses. Now, the Ricky Smith case has lured Gerry through the gates of temptation and into a murderous confrontation with the Dixie Mafia. With Tony stuck on the slippery slope of Slippery Rock and Gerry fighting for his life, the Valentines are finding out just how bad good luck can get.