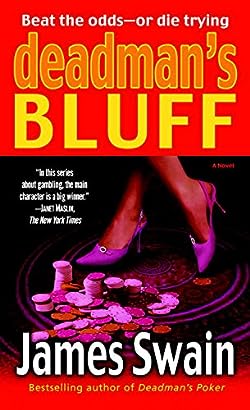 A blind poker player named Skip DeMarco is scamming the world’s largest poker tournament in Las Vegas, and cheating-expert Tony Valentine and his son, Gerry, have been hired to find out how.

DeMarco is tied to some dangerously desperate characters who will go to extremes–even cold-blooded murder–to ensure that the obnoxious DeMarco wins big.

While Gerry flies to Atlantic City to suss out DeMarco’s secret, Valentine stays in Vegas and teams up with an aging grifter named Rufus Steele, who has his own score to settle with DeMarco. On opposite sides of a deadly game, father and son work their way through a colorful landscape of conmen and hitmen. Together, they will have to prove there’s more to any game of chance than meets the eye.

Featuring insider tips for catching poker cheats, as well as a glossary of card hustler terms!