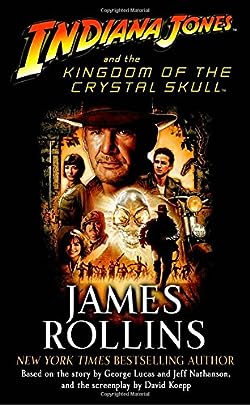 He’s back. Everyone’s favorite globe-trotting, tomb-raiding, wisecracking archaeologist is finally at it again–hurtling headfirst into high adventure and relying on his wits, his fists, and his trusty bullwhip to get him out of deep trouble.

But the man in the jaunty brown fedora and battered leather jacket is no ordinary digger in the dirt. From the fabled lost Ark of the Covenant to the legendary Holy Grail, he’s salvaged the world’s most amazing artifacts, while beating the baddest villains and defying the most breathtaking odds.

Now it’s 1957, the atomic age is in full swing, and McCarthy-era paranoia has the nation on edge. But for Indiana Jones, the Cold War really heats up when his latest expedition is crashed by a ruthless squad of Russian soldiers.

Commanded by a sword-wielding colonel who’s as sinister as she is stunning, the menacing Reds drag an unwilling Indy along as they brazenly invade American soil, massacre U.S. soldiers, and plunder a top-secret government warehouse. Their objective: a relic even more precious–and powerful–than the mythic Ark, capable of unlocking secrets beyond human comprehension.