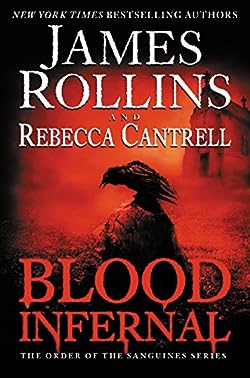 As an escalating scourge of grisly murders sweeps the globe, archaeologist Erin Granger must decipher the truth behind an immortal prophecy, one found in the Blood Gospel, a tome written by Christ and lost for centuries: The shackles of Lucifer have been loosened, and his Chalice remains lost. It will take the light of all three to forge the Chalice anew and banish him again to his eternal darkness.

With the Apocalypse looming and the very barriers of our world crumbling, Erin must again join forces with Army Sergeant Jordan Stone and Father Rhun Korza to search for a treasure lost for millennia, a prize that has already fallen into the hands of their enemy.

But the forces of darkness have crowned a new king, a demon named Legion, who walks this Earth wearing many faces, whose reach is beyond measure, where even the walls of the Vatican fall before him. To have any hope of saving the world, Erin must discover the truth behind man’s first steps out of the Garden of Eden, an event wrapped in sin and destruction, an act that damned humankind for eternity.