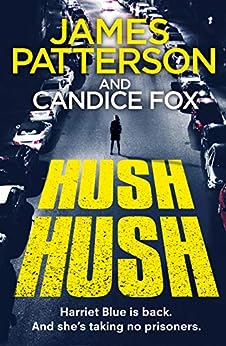 by James Patterson and Candice Fox

The fourth book in the Hariet Blue series continues the story of the dective whose life has startd to uncontrolably spiral downward.

Harriet Blue used to be a detective. Now she’s inmate 3329.

Prison is a dangerous place for a former cop – as Harriet Blue is learning on a daily basis.

So, following a fight for her life and a prison-wide lockdown, the last person she wants to see is Deputy Police Commissioner Joe Woods. The man who put her inside.

But Woods is not there to gloat. His daughter Tonya and her two-year-old child have gone missing.

He’s ready to offer Harriet a deal: find his family to buy her freedom…

Hush Hush picks up a few weeks after the events of Liar Liar. Making good on his promise, Deputy Police Commissioner Joe Woods has had Harriet charged with a litany of crimes, including the murder of serial killer Regan Banks. Denied bail and imprisoned, Harriet is targeted daily by inmates and guards alike, only the prison doctor shows her any kindness.