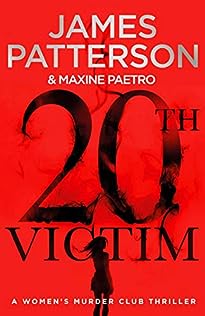 Three victims, three bullets, three cities. This book revolves around assassinations which happen in groups of 3 at the same time in different locations suggesting a serial killer or killers. The victims all have drugs in common and it seems vigilantism.

The first of these simultaneous serial killings occurs in San Francisco, Sergeant Lindsay Boxer’s jurisdiction and reporter Cindy Thomas’s beat. The shooters are precise, as is their target selection. Each one of the men and women down excels at an illegal and deadly activity that is dominating public debate. As the casualty list expands, the fear and fascination with this shooting gallery galvanises the county.

Are the shooter villains or heroes? And who will be next?

Lindsay Boxer is on the hunt for a serial killer or killers who are targeting US criminals.

Joe Molinari is asked to help a friend, but struggles with understanding the motive and with doubts about his friend’s mental health.

And Claire Washburn is fighting her own battles.