Last Updated on February 7, 2022 When it comes to romantic suspense that transcends time, J.D. Robb is the name everyone should be familiar with. Her In Death futuristic romantic suspense series has captured the hearts of millions of readers all around the world since 1995. Currently, the series is still going strong with over 50 books published to date (and many more if we consider the novellas and short stories as well).

Here are all the J.D. Robb books in her In Death series in order (I don’t know why I prefer the name ‘Eve Dallas series‘) for the currently published more than 50 full-length novels and several novellas, starting with Naked In Death, to Abandoned in Death – her latest book in the series published in 2022. 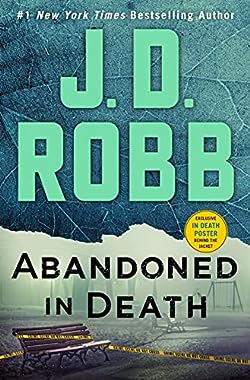 J.D. Robb Books In Order For The In Death Series

About J.D. Robb Biography and Bibliography

J.D. Robb is the pen name of the popular writer Nora Roberts. The J.D. Robb books in order focus on Lieutenant Eve Dallas and her sexy hubby Roarke, who solve crimes in New York in the mid-21st century.

While the series is set in the future and there are some gadgets, tools, cars (ok flying cars and spaceships), the books are really contemporary in nature. They are not sci-fi thrillers, but tried and tested romantic suspense series.

An already established author, J.D. Robb decided (at the nudging of her agent)  to start writing under a new alias to capture a different kind of audience for a new series she wanted to start – a new futuristic crime mystery series, feeling that this series will be less in line with what she’s been writing so far.

And the J.D. Robb In Death Series was born. Sometimes I believe Nora Roberts is better known under this new alias than under her real name because In Death is that popular.

When I first came across one of the In Death novels, I’d never heard of Nora Roberts before, and I’m sure I’m not the only one. Of course, by now I have read almost all Nora Roberts books as well, but the J.D. Robb books series is still much better in my opinion. So a new star was born, on that hope will keep the light shining above her loyal readers for many more years to come.

Reading the J.D. Robb series in order means one thing only: reading her In Death (aka lieutenant Eve Dallas) novels. This alias has only one series of books, which are still going strong even after 42 books in the series (with the latest one, Brotherhood in Death, published in 2016).

I have to admit, I love the In Death series. Very much so. Her books around police detective lieutenant Eve Dallas and her husband Roarke, make my heart beat fast even now, after years of having read the first installment, Naked In Death.

The series is set some years in the future (when intergalactic travel is a very normal thing to do if you have the money for it), although to be honest, the only futuristic aspect is this travel between planets, stars, and moons.

Everything else is a typical (and very good) romantic suspense series with some very hot, clever and lovely people (especially Eve’s husband Roarke, and also the cutie detective Delia Peabody, as well as many other characters that have their own charms).

Nora Roberts, aka J.D. Robb, so far sold over 400 million of her books in print (this includes both books by her real name and her alias). She is, in fact, only one of the two most influential authors out of 100 that the Times magazine wrote about in 2007. With her J.D. Robb alias alone, she sold more than one million books on Kindle. And that was only in the early year, 2011.

While the J.D. Robb series does tend to be a bit repetitive and formulaic if you read them in order one after another one without pause, they are still some of the best romantic suspense novels of all times and people buy them as soon as the latest J.D. Robb books are out.

Even the shorter novellas like Midnight in Death are actually fully fleshed-out books with a whole complex storyline. The only difference is that they have fewer pages.

We first meet lieutenant Eve Dallas in Naked In Death as a rookie NYPD detective who meets her husband Roarke, the attractive Irish Billionaire. Their attraction to each other started from the first moment they saw each other.

Here is one of my favorite quotes from the first book, one that is still relevant in the very latest J.D. Robb book as well, after well over 40 books and adventures together.

… he turned his head, looked five pews back across the aisle and directly into Eve’s eyes. It was surprise that had her fighting not to jolt at that sudden and unexpected punch of power. It was will that kept her from blinking or shifting her gaze. For one humming minute they stared at each other…

Some of the books in the J.D. Robb book list have violence (when the murder scenes are described) and there is sex involved (between Eve and Roarke, of course). Hot, steamy sex. So beware, if you want your books squeaky clean, the J.D. Robb Death series might not be for you. But who am I kidding, I haven’t personally (or online) met so far anyone who said No to this awesome romantic suspense futuristic cop series, the perfect beach read.

So should we read the J D Robb books in chronological order for her lieutenant Eve Dallas series? While each story is different in terms of solving a particular case, I strongly suggest you read them in the right chronological order. The main and secondary characters are all the same, and you will get to learn not only their interaction with each other but also their development and evolution within the settings of the books.

Just getting to know Eve and her husband Roarke and following their ongoing romance (even as a married couple) is something well worth sticking with. If only real life were the same…

One of the books I have reviewed in the series, Festive In Death, was published in 2014 and it was the 39th book in the J.D. Robb series. Only three short years, and now we are at #20 with Golden in Death, to be published early 2020.

63 Responses to “List of the J.D. Robb Books In Order For the In Death Series”