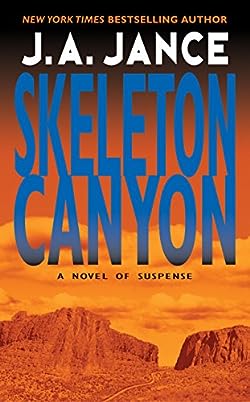 Brianna “Bree” O’Brien never returned from Skeleton Canyon. Someone brutally murdered the pretty, popular teenager who had stolen away under cover of darkness to rendezvous with her boyfriend. Perhaps youthful rage, jealousy and savage passion cost young Bree her life. Or maybe she stumbled onto something too dangerous to know.

Sheriff Joanna Brady of Cochise County knows only too well the pain of losing a loved one to violence. But she is disturbed by the O’Brien’s insistence that Bree’s boyfriend is responsible for their daughter’s slaying. Joanna senses there are words not being spoken, and dark mysteries locked behind doors of the sprawling O’Brien family compound.

But it is the strange disappearance of a good friend that is pulling Sheriff Brady ever closer to the lethal nest of lies, greed and secrets hiding in a desolate corner of the Arizona desert – where the next blood that feeds the parched, cracked earth could be her own.