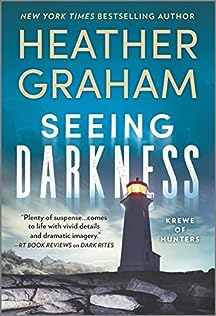 It was supposed to be a fun girls’ weekend in Salem, but when a past-life regression session instead sends a terrifying vision of murder to Kylie Connelly, she’s shaken and doesn’t know what to think. Worse, later she identifies the attacker from her vision: he’s a prominent local politician.

Kylie Connelly is with a group of friends for a bachelorette weekend party. They go to a past life regression therapist. Her friends all had glimpses of their past lives which were wonderful. When Kylie’s turn came things didn’t work out as well. Instead of finding out she had been a princess or even a servant, she sees and feels herself being murdered. Later she sees the face of the politician who was responsible for the murder on television.

Special Agent Jon Dickson of the FBI’s Krewe of Hunters is on the trail of a suspected serial killer based on the scantest of clues and unreliable witness testimony. When he realizes Kylie’s vision might be his best lead, he must gain her trust and get close enough to guide her new talent. Though she doubts herself, the danger Kylie sees is all too real—and the pair will have to navigate a murderer’s twisted passions and deceptions to stop the killer from claiming another victim.