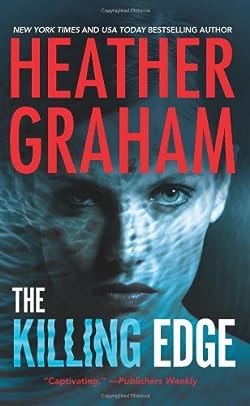 by Heather Graham
Book #10 in the Harrison Investigation series (2010)

Chloe Marin was lucky. She was just a teenager when a party at a Florida beachside mansion turned into a savage killing spree, and she was one of the few to survive. Bloody handwriting on the walls pointed to a cult whose rituals included human sacrifice. Chloe’s sketch of one of the killers linked two dead cult members found in the Everglades to the massacre, closing the case as far as the cops were concerned.

Ten years later Chloe works as a psychologist specializing in art therapy to help traumatized victims, and on the side she finds release in her passion for the martial arts. Police who hire her as a consultant know she’s a literal kick-ass advocate for victims who can’t always speak for themselves.

The current disappearance of a young swimsuit model ranks low on the cops’ priority list. Everyone assumes the girl has run off for some fun in the sun, instead of getting ready for a photo shoot. Everyone but Chloe, who suspects a killer is using the modeling agency to stalk his prey. When the ghost of the model appears, asking Chloe for help, she knows that she has to do everything she can.

The same evil mind is behind the current murders, and she’s afraid she’s the target— and terrified that she won’t be able to cheat death a third time. She has no choice now but to trust Luke on every level, because with a killer closing in, he’s the only one who’s willing to do whatever it takes to keep her alive.