Last Updated on June 1, 2022 Fiona Barton is the author of the Kate Waters thriller series. The first of Fiona Barton’s books in the series, The Widow, has been likened to bestsellers such as Gone Girl and The Girl On The Train. Currently there are three Fiona Barton books in this series.

Here are the Fiona Barton books in order, which will be updated with new novels as the author writes them. 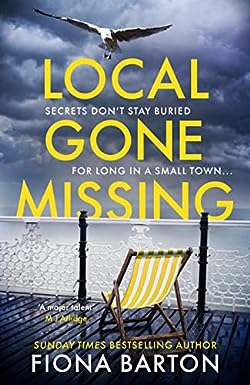 New York Times and the Sunday Times bestselling author Fiona Barton was born in 1957 in Cambridge in the United Kingdom.

She is a British author who prior to writing books worked in London as a writer and journalist for several newspapers including The Daily Mail where she worked as a senior writer, The Daily Telegraph where she was a news editor, and The Mail, where her job was that of a chief reporter.

During her time at the Mail, she was awarded the National Press Awards. She was also chief reporter at the Mail on Sunday, where she won Reporter of the Year at the British Press Awards.

In 2008 she left her journalism career to volunteer in Sri Lanka with her husband as trainers of journalists. From this time she started working with exiled and threatened journalists located all over the world.

While, initially, she left her career as a reporter to volunteer, during her stay in Sri Lanka, she began working on The Widow. This meant her unlearning many of the rigid habits of journalism in order to pick up the freer style of novel writing.

As a national newspaper journalist covering notorious crimes and trials, she found herlsef wondering what the wives of those accused really knew – or allowed themselves to know.

After leaving Sri Lanka, the couple moved to France, where, once her debut novel was published and well received, she started working on The Child, her second book. At the age of 51, Fiona Barton realized that she is now a novelist. Her career has taken some surprising twists and turns over the years.

Even though she had a major career change as she is no longer a journalist, she can’t quite leave the job behind. So she created the character Kate Water, who is also a journalist, which, Fiona readily agrees, is based on the author’s own background, knowledge, and experience. Fiona Barton said in an interview, “there are bits of me in her, I suppose.”

Her debut novel, The Widow, has been so far sold in around 30 countries. After publication, it was shortlisted for the Richard & Judy Search for a Bestseller competition in 2014. The thriller became a New York Times Best Seller and Sunday Times Best Seller.

Right now reading the Fiona Barton books in order for her Kate Waters series entails catching up to her currently three published novels: The Widow, a psychological thriller published in 2016, The Child, another psychological thriller published in 2017 with new protagonists apart from Kate Waters, a reporter who features in both books, hence the reason why they are both considered part of a series, and The Suspect, published in 2019, focusing on two eighteen-year-old girls who go missing and Kate, the journalist who finds this case all too personal. The reading order of these novels is also the publication order.

The Widow is an awesome gripping psychological thriller and it is, indeed, a worthy successor of the above-mentioned queens of the genre. It stars Jean Taylor, whose husband Glen has just died and whose death caused a major ruckus. While alive, Glen was accused of a heinous crime, and now, after his death, journalists are knocking on Jean’s door asking for some answers.

It is the story of a missing child, written from several perspectives, narrated by the wife of the man suspected of the crime, the detective leading the case, the journalist, as well as the victim’s mother. This gives Detective Inspector Bob Sparkes a heads-up into picking up this case and, hopefully, bringing it to a close.

Before writing her debut novel about the missing child, Fiona Barton was working as a journalist, and her idea for this book came from a thought she had about the family of the accused. Everyone is always looking at the victim, but what about those left behind on the accused’s side? How does all this impact, affect his family and how can they deal with the ordeal?

In The Child, the second Fiona Barton book, we meet again Kate, this time investigating another gruesome murder, revolving around the skeleton of a small baby, discovered in London, on a building site. The news on this case will deeply affect two women: one who might have a buried secret that could come to light, and the other who might dread the news that the baby stolen from her at the maternity ward could be the one found just now.

The inspiration for The Child came from seeing a scrap of paper that she kept in her bag (she would always tear out interesting bits and pieces from magazines and newspapers) about an infant child that was found who was once buried.

The third in the Fiona Barton’s books for the Kate Waters series, The Suspect, deals with the disappearance of two teenage girls who were backpacking in Thailand. When one of the girls, Alexandra O’Connor, who is only 18, failed to report home, her family alerts the police of a possible foul play.

Det. Insp. Bob Sparkes talks with Kate, hoping that she could write a piece that, once the girls read, could get them to go back home. But the story hit Kate much harder than that. Her own son, who went to Thailand two years ago, also disappeared.

Reading the Fiona Barton books in order also includes her latest standalone novel, Local Gone Missing, a story about Elise King, a former successful and ambitious detective, who is drawn into investigating the disappearance of a man during the first night of the local festival.

Fiona Barton is currently living the good life in southwest France with her husband, Gary, where she is busy writing her next book, and when has enough free time, is busy traveling, eating well, and enjoying the French countryside. She is usually writing in bed, early in the morning when the only distraction is the family cockerel, Titch, crowing.

This post lists the current Fiona Barton books in order, which should help you find the reading order for her novels, making your selection process among the Fiona Barton’s books seamless. The book list is short, and her novels make wonderful summer reads at the beach, or in winter cozying up with a hot cocoa or tea.