Last Updated on July 12, 2021 F. Paul Wilson is the author of the popular Repairman Jack thriller series, as well as the Adversary Cycle. He also wrote the newer ICE thriller series. Reading the F. Paul Wilson books in order for his entire The Secret History of the World series involves picking up numerous books, some of which are part of one series but not another. The author also wrote several short stories and anthologies, including The Widow Lindley, which is part of the Wayward Pines Kindle Words fan series.

Here are the F. Paul Wilson books in order for his series and standalone novels. 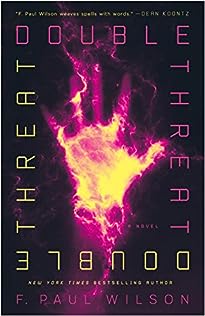 Some books are part of The Secret History of the World series, however, I will not list that as it is too big and it includes mostly books from various other series. For a full list you can check out the author page)

F. Paul Wilson was born in 1946 in New Jersey where he spent most of his years, except during his years away in school. He attended the Xavier High School in NYC, after which he enrolled at the Georgetown University in DC, from where he graduated in 1968 from medical school.

He then went to the Kirksville College of Osteopathic Medicine from where he graduated with a D.O. degree in 1973.

While initially determined to become a doctor, the path for him turned soon towards a new direction. As a medical student, he spent some time writing short stories which he sold quite fast. In fact, his first major sale was in 1970 while in medical school, for a story he sold to Analog.

His first novels were all science-fiction stories, with his debut novel called Healer, published in 1976. At the beginning of the 1980s, he switched to writing in the horror genre, with a first novel called The Keep, which also became the first in The Adversary Cycle horror series. The book was also adapted to the big screen in 1983 by Paramount, starring Gabriel Byrne, Scott Glenn, and Ian McKellen.

In 1990 he switched yet genres again, this time writing medical standalone thrillers and interactive scripts for multimedia companies such as Disney Interactive.

In 1996 he also co-authored a book, titled Virgin, with his wife, who was also his high-school sweetheart.

His Repairman Jack series is the author’s most popular creation, with the books having sold several million copies over the years. The series is also in discussions for being turned into a franchise movie series, with the rights bought by Beacon Films, along with Disney and Buena Vista as distributors.

His books have appeared numerous times on the New York Times bestseller list and the author received several awards over the years, including the Grand Master award by the World Horror Convention, the Lifetime Achievement Award from the Horror Writers of America, the Stoker Award, Prometheus and Prometheus Hall of Fame Awards, the Porgie Award, the Pioneer Award from the RT Booklovers Convention, and the Inkpot Award from San Diego ComiCon.

F.Paul Wilson is currently living in New Jersey with his wife, his two daughters and three cats, and is actively working on his next book, while he is also apart-time practicing family physician.

He also wrote numerous other sci-fi, horror, mystery and thriller series and standalone novels, almost all sharing a common trait: they all somehow feature supernatural elements in the stories.

His latest novel is called Double Threat, a standalone thriller published in 2021.

One Response to “F. Paul Wilson Books In Order”