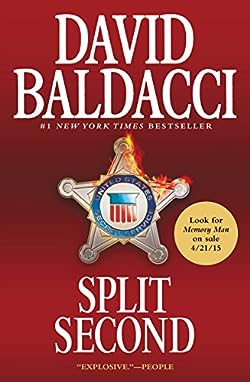 It was only a split second–but that’s all it took for Secret Service agent Sean King’s attention to wander and his “protectee,” third-party presidential candidate Clyde Ritter, to die. King retired from the Service in disgrace, and now, eight years later, balances careers as a lawyer and a part-time deputy sheriff in a small Virginia town.

Then he hears the news: Once again, a third-party candidate has been taken out of the presidential race–abducted right under the nose of Secret Service agent Michelle Maxwell. King and Maxwell form an uneasy alliance, and their search for answers becomes a bid for redemption as they delve into the government’s Witness Protection Program and the mysterious past of Clyde Ritter’s dead assassin.

But the truth is never quite what it seems, and these two agents have learned that even one moment looking in the wrong direction can be deadly.

Full of shocking twists and turns, and introducing a villain to rival Jackson in Baldacci’s The Winner, Split Second is pure, mind-numbing adrenaline to the last page.