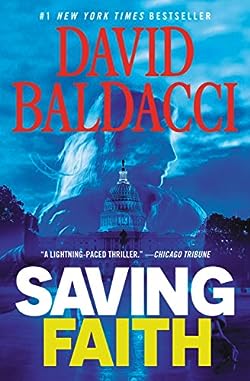 Saving Faith is a brilliant novel of genuine insight into the murky world of Washington powerbroking and covert espionage. A truly riveting thriller about a cash-for-questions scandal involving the highest ranking members of the US government.

Washington lobbyist Danny Buchanan has made a fortune peddling influence for his cash-rich client companies, and now he’s attempting to do the same for Third World countries and good causes. But no-one is listening – what’s in it for them? So he bribes Washington politicians to take notice – until the CIA want in on the illegal strategy.

Danny’s partner, the tough-minded, independent and fiercely loyal Faith Lockhart senses it’s all going to turn bad, so she tells all to the FBI in exchange for her and Danny’s immunity. But she doesn’t anticipate the ruthlessness of the CIA, a diminished and directionless organisation post-Cold War, who’s Head is a renegade obsessive and who is determined to take out Faith and anyone remotely connected to her…