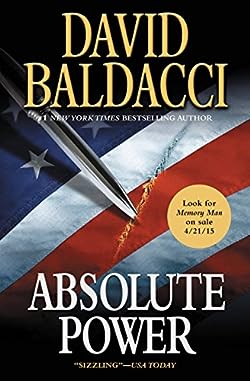 A thriller of unparalled suspense that dares to explore the unthinkable.

Trapped behind a two-way mirror in a country house in Maryland Luther Whitney, a professional burglar, witnesses an event that destroys his faith in justice forever. A vicious murder – involving the US President.

Running for his life, but not before he picks up a bloodstained letter opener that puts the president at the scene of the crime, the burglar becomes the target of a clandestine manhunt orchestrated by leading members of the executive branch.

Meanwhile, Jack Graham, once a public defender and now a high-powered corporate attorney, gets drawn into the case because the on-the-lam burglar just happens to be the father of his former financee, a crusading Virginia prosecutor.

Embroidering the narrative through assorted plot whorls are the hero’s broken romance; his conflict over selling out for financial success; the prosecutor’s confused love-hate for her burglar father; the relentless investigation by a northern Virginia career cop; the dilemma of government agents trapped in a moral catch-22; the amoral ambitions of a sexy White House Chief of Staff; and the old burglar’s determination to bring down the ruthless president.

Meanwhile, lurking at the novel’s center like a venomous spider is the sociopathic president