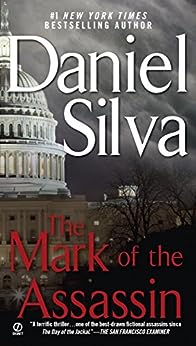 When a terrorist bomb blows Flight 002 out of the sky off the East coast, there is only one chilling clue. A body found near the crash site bears the deadly calling card of an elusive, lethal assassin–three bullets to the face. Michael Osbourne of the CIA knows the markings. Personally. Propelled by an obsession that threatens to consume his career, his family, his life, Osbourne is now hot on the assassin’s trail. But in a world of shadows and lies, intrigue and cover-up, the man with a mission puts himself and his loved ones in the sights of the most ruthless, diabolical assassin on earth…

Bestselling novelist Daniel Silva (author of The Unlikely Spy) draws upon his experience as a foreign correspondent and a Washington journalist in The Mark of the Assassin. Set in London, Cairo, Amsterdam, and Washington, the storyline follows CIA case agent Michael Osbourne as he attempts to locate the terrorists who shot down an airliner off the coast of Long Island. Osbourne has two main antagonists: Delaroche, a KGB-trained expert assassin ordered to kill the handful of people who know the truth, including Osbourne, and the corrupt political culture of Washington, which ominously stymies him at every turn.

There’s a love story at the core of this book, as well as a brave attempt by Osbourne to reconcile a mystery in his past with a present he has not fully accepted. The prose is slick, and readers will find themselves racing through these pages as the body count grows and the conclusion nears. The Mark of the Assassin is a worthy effort from a prominent star.