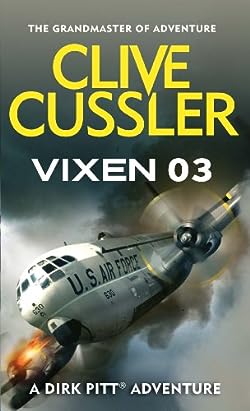 1954. Vixen 03 is down. The plane, bound for the Pacific carrying thirty-six Doomsday bombs — canisters armed with quick-death germs of unbelievable potency — vanishes. Vixen has in fact crashed into an ice-covered lake in Colorado.

Over thirty years ago, on an ultra-secret flight to the South Pacific, the transport plane Vixen 03 vanished. It was believed to be lost at sea. And carrying canisters of the most lethal substance known to man.

1988. Dirk Pitt, who heroically raised the Titanic, discovers the wreckage of Vixen 03. But two deadly canisters are missing. They’re in the hands of a terrorist group. Their lethal mission: to sail a battleship seventy-five miles up the Potomac and blast Washington, D.C., to kingdom come. Only Dirk can stop them.

Now Vixen 03 has returned to haunt the world. Dirk Pitt, the ace maritime troubleshooter who raised the Titanic, is the only man who can overcome the nightmarish problems involved in retrieving her cargo. And the price of failure is terrifying.