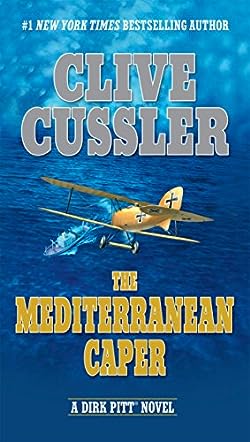 When Clive Cussler published his first novel in 1973, he knew he didn’t want to write a familiar kind of character—no spy or detective or undercover investigator— his hero would have grand adventures set on or under water. He named him Dirk Pitt, and his organization the National Underwater and Marine Agency, or NUMA—and one of the world’s most beloved series characters was born.

Now in a special 40th-anniversary edition, complete with endpaper maps and a new foreword from Cussler, here is the book that started it all, filled with every one of the Cussler hallmarks: the cutting-edge technology, the treacherous men and exotic women, and, of course, the fabulous plots.

On a quiet Greek island, a U.S. air force base has come under attack—by a World War I fighter plane. . . .

Now it is up to Dirk Pitt, Al Giordino, and the rest of the NUMA team to root out the elusive truth behind the incident—and find out how it’s connected to mysterious acts of sabotage against a scientific expedition, an international smuggling ring, and a dark-haired beauty with some dangerous secrets.