Candice Proctor, aka C.S. Harris, aka C.S. Graham is the author of over 20 novels, including the popular Sebastian St. Cyr Regency mystery series, which she writes under the name C.S. Harris and the Jax Alexander thriller series, which she writes under the pseudonym C.S. Graham. The latter series is co-authored with her husband.

Having said that, here are the C.S. Harris books in order for her wonderful historical mystery series, which I adore, as well as the Jax Alexander thriller series she co-authored with her husband under the pen name C.S. Graham. 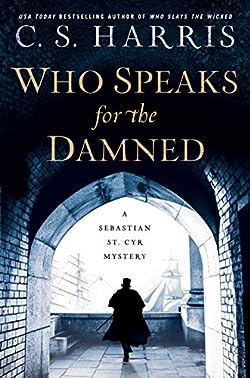 Candice grew up surrounded by the army, with her father being a career Air Force Officer. During her younger years, she traveled and lived in several countries, including Spain, Greece, England, France, Jordan, and Australia.

Before becoming a full-time author, Candice was an academic, teaching at the University of Idaho and Midwestern State University in Texas, as well as working as an archaeologist on several dig sites around the world.

Her later career included her being a partner in an international business consulting firm.

Currently, the author lives in New Orleans, Louisiana with Steve Harris, her husband who is a retired US Army officer (with whom she wrote the Jax Alexander series), two daughters and several cats.

The author has a knack of bringing that particular era to life in her descriptions in each book. Especially the seedier, darker and more dangerous parts of the city where crime is perpetually at home, is extremely well depicted in that you feel as if you’ve actually there, looking at the area with your own eyes.