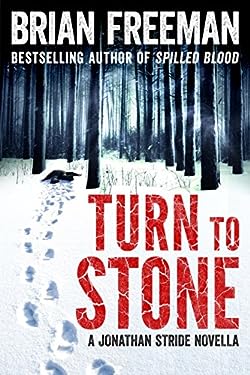 This novella from master of suspense Brian Freeman, winner of the International Thriller Writers Award, is not to be missed. —

Turn to Stone takes place in the days immediately preceding the events of The Cold Nowhere, the sixth book in Freeman’s thrilling ‘Jonathan Stride’ series.

Driving home to Minnesota one night after a long road trip, Duluth detective Jonathan Stride stops by the small Wisconsin town where his mother is buried to pay a visit to her grave. As he walks through the cemetery, a local sheriff’s car pulls up and an officer steps out, pulls out his gun, and takes his own life before Stride even has time to react.

After giving his statement to the police, Stride is asked to unofficially investigate the reason behind the suicide by the officer’s young widow—a woman who several years earlier had become famous as the survivor of a horrific kidnapping—and to clear out of town as soon as possible by the sheriff, who is up for reelection.

Against his better instincts, Stride becomes enmeshed in a gruesome and suspenseful search for a local killer who knows things no one alive should know—and who may kill again to keep it that way.