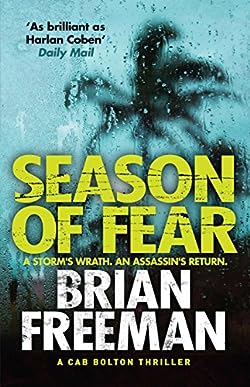 Cab Bolton is not the typical policeman. He doesn’t even look like a policeman: a Robert Redford species raised in the Florida sun, you would never see him wearing something that is not a perfect or expensive signed suit. Then he is rich – thanks to his mother who is a Hollywood actress. He is a policeman because he is amused by being a policeman. Yet, he doesn’t like authority – and not even rules, for that matter.

Lake Wales, Central Florida. 10 years ago, a political fundraiser became a bloodbath when a hooded assassin carried out a savage public execution. Three men were massacred, casting a dark shadow over the Sunshine State. A decade on, history is threatening to repeat itself.

The widow of one victim, herself now running for Governor, has received an anonymous threat – a newspaper clipping from that fateful day, along with the chilling words ‘I’m back.’

Florida detective Cab Bolton agrees to investigate the threat against this candidate, Diane Fairmont: an attractive politician who has a complicated history with Cab’s mother, Hollywood actress Tarla Bolton – and with Cab himself. But by doing so, Cab is entering dangerous waters.