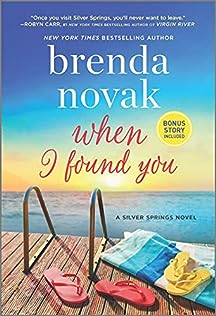 Natasha “Tash” has been in love with Mack from the young age of 16. However, he was 25 and his dad was married to her mom. Mack resisted her advances, knowing that it was wrong on many levels. Despite their parents’ divorce, Tash and Mack (and his brothers) have stayed in touch. Then, there was that one night 7 years ago.

After everything she worked for is destroyed, pediatrician Natasha Gray is determined to build a new life. Divorced, bankrupt and suddenly a single mom, she’s ready to start over in Silver Springs—on her own. She certainly doesn’t need help from Mack Amos, the man who’s already broken her heart twice.

Although Mack has had feelings for Tash since they first met, too many things have stood in the way. He’s always given her the support she needs, though, and he’ll do the same now. Even if the desire he wrestles with threatens to undermine his intentions…

But her heart is not the only reason Natasha wants to keep Mack at bay. More time in her life means getting closer to her son, which could lead to a revelation neither of them is ready to face. Family drama with the Amos brothers, this time centered around Mack and their stepsister, Natasha.