Last Updated on July 13, 2022 The Blake Crouch books in order (publication order and reading order) take you from the epic futuristic Wayward Pines to bestselling thrillers like Dark Matter, Recursion, and Upgrade.

Blake Crouch is an American New York Times bestselling novelist and screenwriter who instantly became an international bestselling author due to his popular Wayward Pines series, which has been recently turned into a 10 episode mini-series directed by M. Night Shyamalan and starring Matt Dillon (btw, we’re still hoping for a second season…).

I am usually not a cliche person, but I’ve got to say it: if you haven’t at least heard of the TV series, which aired on Fox all over the world wherever Fox is available on cable TV, you’ve been living under the proverbial rock. This series took the world by storm, and I can safely say that most people who have watched the episodes have also purchased the trilogy because they got hooked on it – and with very good reason. It is a series/trilogy like no other. Crime, mystery, dystopia, sci-fi and post-apocalyptic all in one, a taste for literally everyone. Here are all the Blake Crouch books in order of publication for his series and his standalone novels. 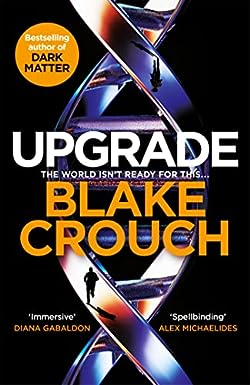 Serial Killers Uncut, aka Bad Girls is the first book in publication order, and the third in chronological order.

Blake Crouch was born in 1978 near Statesville in North Carolina. When he was a child, he wrote stories that he would tell his brother to scare them. In 2000 he graduated Phi Beta Kappa with degrees in English and Creative Writing at the University of North Carolina at Chapel Hill.

He wrote his first two books in 2004, which is the year when he became a full-time writer. Desert Places and Locked Doors were published in 2004 and 2005. His novels have sold so far over a million copies and have been translated into over 20 languages. The book Pines has been nominated in 2013 for the Best Paperback Original Thriller Award by the ITW.

The author’s novel that really moved me is called Dark Matter, a standalone novel published end of 2016. The book took the world by storm. It was ingenious, different from anything else out there and it became an instant hit. It is a sci-fi thriller of epic proportions crossing boundaries and timelines. I like the beginning of the book, when Jason Dessen was asked, “Are you happy with your life?” just before getting kidnapped by an unknown assailant. This started a chain of events that left my head spinning and made me think about the book long after I’ve read it.

Blake Crouch spent two years working on this story, but he was really working on it (at least in his mind) for the last 10 years. It was such a massive project. The science behind Dark Matter is pretty solid. It encompasses quantum mechanics in an easy-to-digest form for everyone. I mean, quantum mechanics is a dense field of science, but even if you had no clue about the Schroedinger’s Cat, by reading the book, you will get gotten the bare minimum of the gist of what makes quantum mechanics so interesting today. Then the book has an action-packed storyline, and, of course, there is love…

Now, of course, while it is very out there (in a good way), so is Wayward Pines. The simple idea of it is mindboggling. When Secret Agent Ethan Burke arrives in the small Idaho town, he has clear mission: find and rescue two federal agents who went missing in the small town the previous month. Blake Crouch’s imagination is definitely very vivid and engaging. Reading the Blake Crouch books in order for this series takes you to a strange psychedelic world (worlds, really) where everything is possible. And what’s best, the science is pretty sold there too.

While the author has written several standalone novels and a few series, I think most people will know him mostly for Blake Crouch’s end of the world trilogy which became a bestselling two-season TV series watched by people all around the world. The books in the series themselves have been sold internationally as well. The last novel in the series, The Last Town, ended the extremely popular trilogy with many readers crying for more books. That’s why several authors have created their own Wayward Pines inspired stories that are usually available on Amazon.

Good Behavior, Blake Crouch’s second standalone novel of the year 2016, is, in fact, Blake Crouch’s republication of the Letty Dobesh Chronicles novellas in one book. It was recently also adapted into a television series starring Michelle Docker.

Recursion, the author’s standalone book in 2019 is a science-fiction thriller story about memories and how they can invade a person’s life and their mind. And how science can have dire unintended consequences even when done with good intentions. It is one of my all-time favorite thrillers. He also co-created the TNT show Good Behavior, based on his Letty Dobesh novellas.

When the SWAT team gives the all-clear and Logan Ramsay steps into the basement, he has no idea that everything’s about to change. Then there’s the hiss of aerosol. The explosion. The shrapnel that punctures his hazmat gear. Logan wakes up to find himself in a hospital bed, attended by doctors in their own hazmat suits, his wife and daughter looking on from behind the glass.

The doctors say he’s been infected by a virus–one designed not to make him sick, but to modify his very genetic structure. In a world where the next-generation gene-editing tool known as Scythe is widely available–and has already reaped disastrous consequences–the possibilities are too many and terrifying to count. Except that after the fever, the pain, the fear…the virus is gone. And according to his government bosses, Logan’s got a clean bill of health.

But the truth is that with each day that passes, Logan’s getting smarter. Seeing things more clearly. He’s realizing that he’s been upgraded in ways that go beyond even Scythe’s capabilities–and that he’s been given these abilities for a reason. Because a holy grail of genetic engineering–one that could change our very definitions of humanity–has just been unearthed. And now it’s up to him to stop it from falling into the wrong hands. Logan’s becoming something more. Something better. Even with the whole world hunting for him, he might be able to outthink his opponents and win the war that’s coming. But what if it’s at the cost of being himself?

Currently, the author is living in southwest Colorado with his wife and three children, and is working as usual on a new book.