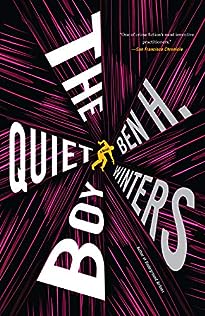 From the bestselling author of Underground Airlines and Golden State, a sweeping legal thriller about a sixteen-year-old who suffers from a neurological condition that has frozen him in time, and the team of lawyers, doctors, and detectives who are desperate to wake him up.

Wesley Keener lies in bed: not dead, not alive, not in a coma or vegetative state, but simply frozen at an unchanging 16 years old, the forward course of his existence having simply stopped midway through sophomore year. His condition is the result of something called Syndrome J, an extraordinarily rare neurological event, at least according to the brilliant young neurologist Anna Pileggi.

When Wes was first hospitalized, his parents Beth and David Keener hired acclaimed PI Jay Shenk to help find answers about the illness that befell their beloved son. Now, years later, when David is accused of murdering the brilliant young doctor who served as an expert witness in the hospital case, Shenk and his son Ruben discover that this standard malpractice suit is part of something more sinister than anyone imagined. An alternate explanation, brought forth by a mysterious older man, suggests an inter-dimensional entity wrecking havoc on the community. The child is not a prisoner, this stranger insists, he is a prison.

Told from alternating perspectives, The Quiet Boy explores the tensions between justice and compassion, in heart-pounding prose. With clever plotting, and a knack for character, Winters expertly weaves a group of misfits together in a race to save themselves, and an innocent life.