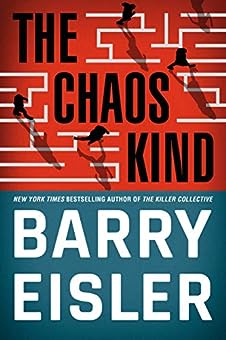 Assistant US Attorney Alondra Diaz hates traffickers. And she’s determined to put one of America’s most powerful financiers, Andrew Schrader, in prison forever for his crimes against children.

But Schrader has videos implicating some of the most powerful members of the US national security state. To eliminate Diaz, the powers that be bring in a contractor: Marvin Manus, an implacable assassin whose skills have been forged in intelligence, the military, and the hardest prisons.

Enter former Marine sniper Dox and black-ops veteran Daniel Larison with an unusual assignment: not to kill Diaz, but to keep her alive.

A lot of players are determined to acquire the videos and the blackmail power they represent. But with Seattle sex-crimes detective Livia Lone, “natural causes” killer John Rain, and ex-Mossad honey-trap specialist Delilah, the good guys might just have a chance.

In a way, The Chaos Kind is a similar take on the Epstein situation where there is a billionaire providing and grooming young girls for rich, high up people for a long time and has the tapes of these encounters for insurance in case anything comes back to him.