Last Updated on July 27, 2021 Joseph Badal has written several thriller novels of suspense, among them the Danforth Saga series about a CIA special ops agent who is dealing with terrorist threats, a series about two female detectives in the Lassiter/Martinez Case Files, and The Curtis Chronicles books, along with a few standalone novels as well.

Here are the Joseph Badal books in order for all his published novels. 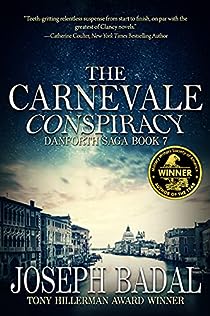 Born in 1944 in Chicago and raised in Philadelphia, the American thriller author Joseph Badal grew up in the world of storytelling, with most of the family history being passed down from generation to generation. He is currently a retired commercial and mortgage banker who resides in the East Mountains.

He received an undergraduate degree in International Finance from Temple University and an MBA from the University of New Mexico prior to writing books. He also graduated from the Defense Language Institute, West Coast, and from Stanford University Law School’s Director College. A notable financier, he also served in the U.S. Army as a commissioned officer.

The author admits that his career as a fiction writer has been heavily influenced by Robert Ludlum along with his own real-life experiences while serving in the army at home and abroad (among others in Vietnam and Greece where he received numerous decorations) being involved in highly classified OPs, and with influences coming from his extensive knowledge of banking and financial service industries, where he worked for over 40 years.

Besides writing books, he is also President of Joseph Badal & Associates, Inc., a management consulting firm. He worked for over four decades in the banking and financial service industry, and before that he was a commissioned officer in the U.S. Army, a job which took him to faraway parts of the world including Greece and Vietnam in high-secret operations.

The author’s latest book is The Carnevale Conspiracy, the 7th novel in the Danforth Saga series. The Curtis Chronicles and the Lassiter/Martinez Case Files are two other highly acclaimed series. In addition, there are several standalone novels that the author has written over the years, with the latest one Payback being published in 2020. In fact, the Lassiter and Martinez books, featuring Susan Martinez and Barbara Lassiter, two wonderful female detective-sergeants with the Bernalillo County Sheriff’s Office, are some of my favorites Joseph Badal books. Although Bob and Liz Danforth are some great characters as well.

In various interviews, the author mentioned that some of the books feature characters that are amalgams of people he actually knows, and some stories, such as The Motive, are based on real-life events that happened around him. Motive was inspired by events that happened to a friend and his sister in Hawaii, evolving around human trafficking and drug smuggling.

In terms of writing, Joseph Badal is a member of several influential groups such as the International Thrillers Writers, Sisters in Crime, Military Writers Society of America, Croak & Dagger, Public Safety Writers Association, and Southwest Writers Workshop. His books are full of roller coaster-like tension which he wants his readers to experience through his thrillers. For Joe, writing is not a hobby but a serious profession that needs constant commitment.

The author said that he sold a movie option to the Lassiter Martinez Case Files series, although we are still waiting for further details.