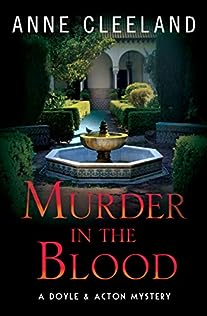 This homicide case featured aristocrats as far as the eye could see, between the Russians and the Spaniards—and Acton, of course, who was supposedly investigating the others but seemed a little too deferential, for Doyle’s taste. Why wasn’t her husband moving in on the killer? And why did she have the sense that she was standing on the outside, peering into a world where there were no laws and no explanations—only birthrights, forged in ancient blood.

Called to investigate an apparent homicide on the grounds of a visiting professor, Sargent Kathleen Doyle and Detective Inspector Thomas Williams are shocked to discover the victim is a witness who had come forward and named names in one of their biggest cases.  With Lord and Lady Acton facing the investiture of a new title, Doyle is horrified to realize just how bad baby Edward’s antecedents really are.

As the investigation continues and they learn more and more about the case, they determine that the murder is connected to a series of vengeance murders stemming from the last big case. Somebody is pulling the strings, but it cannot be the one that it so obviously appears to be. So, if not him – who – and more importantly – why! The case takes many twists and turns before all is finally revealed and the real mastermind is identified and the reason revealed.