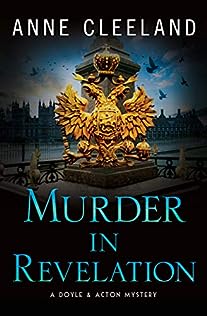 Detective Sergeant Kathleen Doyle was investigating a tip she’d received about doctors who were being assaulted at a London free clinic, but—strangely enough—none of the volunteers was willing to give her a statement. Instead, her only witness offered a fanciful tale about supernatural evildoers—which was nonsense, of course; it was clearly an attempt to shift the blame to the appropriate cultural bogeyman.

Although it did seem as though there were a lot of strange things happening, and all of them at once. A shame, that she had to interrupt the investigation to attend a servant’s funeral at Trestles, but Acton felt they were obligated to go. If only she didn’t feel as though her husband was a little too eager to attend this particular funeral…

Doyle is expecting their second child and Acton has become hyper-vigilant in making sure she is taking care of herself. Yet, she still manages to fall into a weird investigation. A volunteer doctor at a charity clinic is attacked – and she has a strange tale to tale to tell. She keeps telling Doyle “the evil ones are eating the souls of the children.”

In this book, ghosts of murder victims and details from previous books played a significant role.  One murder that was left hanging in the previous book was finally solved.