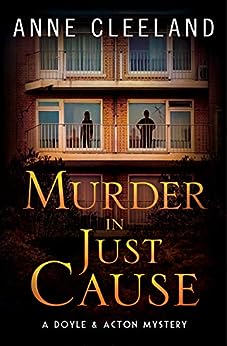 Murder in Just Cause by Anne Cleeland is the ninth book in the Doyle and Acton Mystery series.


Doyle was back at Scotland Yard after taking maternity leave, and the powers-that-be had decided they’d ease her way by assigning her to assist DS Isabella Munoz, as her second, which was a fate only slightly worse than death.

Annoying, it was, that she had to answer to Munoz; not to mention that Munoz wasn’t given many high-quality homicide assignments in the first place.
As a case in point, the first assignment out of the box was a possible suicide at the housing projects, something that happened with such regularity that it was a wonder the responding officer had even thought it worthy of a detective’s notice. . .

As it turns out, their first case together is the suspected suicide by drug overdose of a “kook” at the shamble location of a seedy housing project. And the “kook” is one that Munoz actually knows.