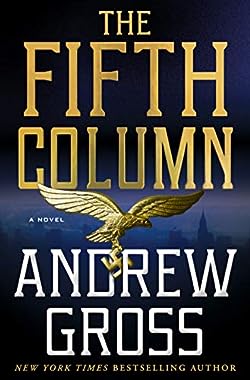 Born in 1953 in New York City, Andrew Gross grew up in Manhattan. He attended the Barnard School for Boys, a college prep-school. In 1974 he received his English degree from  Middlebury College and in 1982 he graduated with a Masters in Business Policy from Columbia University.

In 1979 he met Lyn on a blind date and married her after three years. Before becoming a novel writer, he had several jobs. He worked for two years in Denver as a dress buyer, after which he opened his own fast-food restaurant called Ebeneezer’s, which was popular for its stew and soup.

After a while, he went back to work in the family business of clothing manufacturer at a business called  Leslie Fay Companies, named after his mom.

In 1984 he took over and brought back to success Head NV Sportswear, making it a top ski and tennis apparel manufacturer. He then went back to the family business for a better position, after which he left to find his own luck, working for several other sports apparel companies.

Before starting to write his novels, he took part in the Writers Program at the University of Iowa, following which he worked on his first novel, Hydra, a political thriller, which was finished after 3 years, however it was never published as the rejection letters came one after another one from publisher to publisher.

While struggling with trying to publish his first book, he received a call from James Patterson, who offered him a co-authorship on his Women’s Murder Club series, and Andrew Gross co-authored several books including Second Chance and Third Degree.

Eventually, after 7 years, in 2006 he decided to strike out on his own and write books solo. His first novel was published in 2007 titled The Blue Zone, and it became an instant hit.